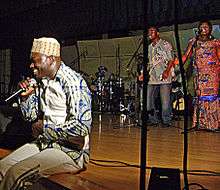 King Mensah (born August 12, 1971) known as "The Golden Voice of Togo", is one of the most popular musical acts from Togo, West Africa. Though based in Lomé, he regularly records and promotes his albums in Paris, and has embarked on several world tours since 2005. Singing in Mina, Ewe, and French, King Mensah's sound fuses elements of traditional Ewe music (Agbadza and Akpessé), and Kabye dance-drum music, with funk, reggae and West African Afropop. King Mensah's lyrical themes are steeped in religion and hopeful encouragement for the orphaned, oppressed and downtrodden.

King Mensah was born Ayaovi Papavi Mensah to a father from Togo and a mother from Benin. Mensah began performing with a 'ballet' of traditional Togolese folkloric music at age 9. In his formative years, he was a member of the band 'Les Dauphins de la Capitale'. He acted with Ki-Yi M’Bock Theatre in Abidjan, Côte d'Ivoire, in the early 1990s, then traveled to Europe, Japan, French Guiana, France and Benin as an actor and singer. In 2005, Mensah founded a philanthropic organization called "Foundation King Mensah" in Togo dedicated to the protection and education of orphans, including an orphanage in Agbodrafo, 25 km east of Lomé.